RECLAIM THE AWM FROM WEAPONS COMPANIES

The six biggest weapons companies in the world have all had financial relationships with the Australian War Memorial.

The AWM can’t fulfil its obligations to the public, or properly make sense of our wartime experience, when it takes money from companies with vested interests.

The AWM’s job is to commemorate our war dead – not promote companies that profit from the harms of war.

Most people don’t want the AWM associated with weapons companies: 68% of people agree that the memorial should not accept money from companies that make weapons of mass destruction.

The AWM’s partnership with global weapons giant Lockheed Martin is about to expire. By acting now, we can reclaim the AWM from Lockheed Martin – and kick weapons companies out of the national memorial once and for all.

Read media coverage of our campaign

Watch The Project’s story on this issue 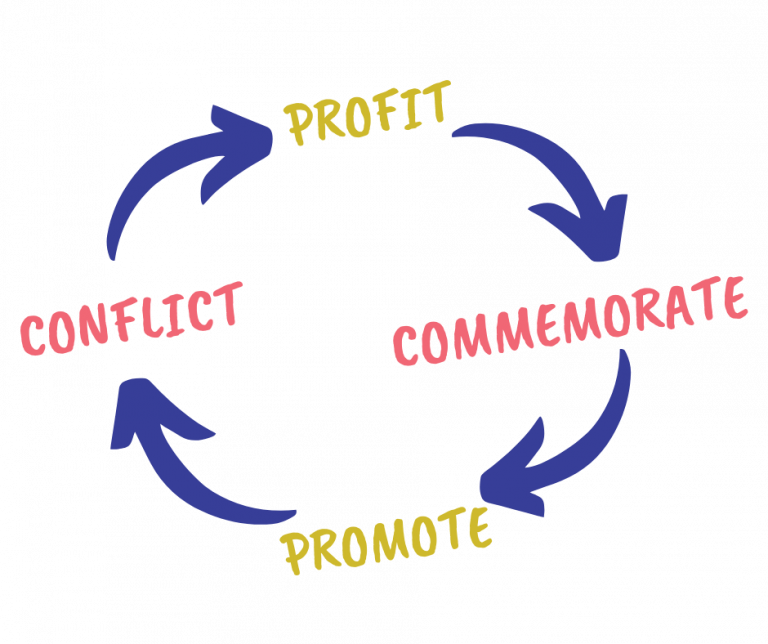 The AWM has accepted money from….

Boeing is the third-largest arms company in the world.  Boeing has sold upwards of US$21 billion of arms to the Saudi Arabia/UAE-led coalition’s campaign in Yemen, and is described has having “one of the most checkered ethical records of any large corporation.”

Boeing is involved in the production of illegal nuclear weapons.

AWM’s previous director, Brendan Nelson, became an executive at Boeing immediately after stepping down from the AWM.

Northrop Grumman is involved in the production of illegal nuclear weapons.

Thales is named in a 2019 complaint submitted to the International Criminal Court. The  complaint sets out the case for Thales’ criminal responsibility for supplying arms used by members of the Saudi Arabia/UAE-led Coalition in potential war crimes in Yemen.

Thales is involved in the production of illegal nuclear weapons.

BAE Systems is alleged to have secretly sold mass surveillance technology to six Middle Eastern governments that have been criticised for repressing their citizens, and is named in a complaint to the International Criminal Court in relation to alleged war crimes in Yemen.

BAE is involved in the production of illegal nuclear weapons.

Raytheon is the second biggest weapons company in the world.

Since the outbreak of war in Yemen, Raytheon is estimated to have sold over US$5 billion in weapons to Saudi Arabia.

Raytheon missiles have been linked to over a dozen attacks on Yemeni civilians, including the 2016 bombing of a Sana funeral hall, and a 2022 attack described by the United Nations as the worst civilian-casualty incident in recent time.

Raytheon is involved in the production of illegal nuclear weapons.

Lockheed Martin, including its wholly-owned Australian subsidiary, makes more revenue from warfare than any other weapons company in the world.

A 2021 shareholder motion found that, “Disclosure on governance and embedding of the commitment to respect for human rights throughout the business is absent.”

At the 2022 shareholder meeting, the Lockheed Martin board of directors recommended a vote against comprehensive reporting on the human rights impact of the business.

Directors told shareholders that, “Such a report would… interfere with our ability to serve our primary customers, the U.S. government, and its allies.”

The company’s customers include some of the world’s worst human rights abusers, such as Saudi Arabia and the UAE.

Saudi Arabia and UAE are waging war in Yemen that is having a catastrophic impact on millions of civilians.

A UN Human Rights Council report in 2019 stated that parties to the conflict, including Saudi Arabia and UAE, had committed possible war crimes, and urged other nations to refrain from providing arms that could be used in the war.

In August 2018, dozens of children were killed, and many more injured, when a busload of school children was hit by a missile made by Lockheed Martin.

Lockheed Martin provides key services and components for both UK and US nuclear armed missiles, which have been deemed illegal by the 2017 Treaty on the Prohibition of Nuclear Weapons.

Drone warfare terrorises civilians who live beneath these hovering weapons, and caused the deaths of thousands of civilians (including hundreds of children) between 2010 and 2020.

Lockheed Martin has played a significant role in military interrogations in both Iraq and Guantanamo Bay.

Lockheed Martin is involved in the provision of products and services that are illegal or of grave humanitarian concern.

Lockheed Martin has been the subject of more instances of misconduct in the US in recent decades than any other weapons contractor.

Lockheed Martin is currently the subject of a class action alleging widespread toxic contamination caused by its Florida heavy weaponry plant, and is named in a lawsuit brought by former employees of an Ohio nuclear facility.

The employees allege that Lockheed Martin and other defence contractors managing the facility “‘actively deceived workers, the general public and regulators’ by suppressing critical information, including the release and spreading of nuclear poison, safety violations, arson, workplace exposures, and illegally transporting highly radioactive materials, as well as conspiring to destroy and falsify records.”

In 2015, Forbes Magazine reported on“Lockheed’s astonishingly corrupt influence peddling”, and cited a “chokehold” on the nation’s defense funding, and illegal, anti-competitive, fraudulent and other actions.

In Australia, Lockheed Martin contributes to the Australian Strategic Policy Institute, which claims to be “an independent, non-partisan think tank that produces expert and timely advice for Australian and global leaders”.

In 2021-22 Lockheed Martin spent over US$12 million on lobbying: more than any other weapons contractor. In 2021, Lockheed donated US$6 million to US politicians.

In Australia, Lockheed Martin is amongst the weapons companies found to be making extensive use of backroom lobbying, manipulation of research and policymaking, and supplying information to ‘expert’ commentators who can be relied upon to talk up tensions, arms races and possible war.

Reclaim the AWM from Lockheed Martin.

The Australian War Memorial takes money from weapons companies that profit from war.

The AWM can’t fulfil its obligations to the public, or properly make sense of our wartime experience, when it takes money from companies with vested interests.

The AWM’s job is to commemorate our war dead – not promote companies that profit from the harms of war.

Send a message to the AWM Director today.

We’ve already written a letter for you to use  – fill in your details to see our suggested text. But can you take two minutes to add something personal?

Please add a brief paragraph setting out your personal or professional reasons for taking action on this issue.

US political donations and lobbying: https://www.opensecrets.org/industries/indus.php?Ind=D